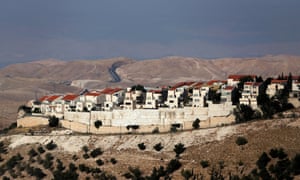 This is why they say Trump is dangerous.

Unless the US is able to change something, Israeli settlement under occupation is and will remain illegal under international law expressed in past UN resolutions. And that's the way it should be, for as long as their full individual and collective rights remain unrecognized.  If they would be, they could vote to change the nature of the state that governs them into something new. No Israeli government would allow that. So we have a situation of apartheid, which the UN cannot accept.

By embracing the Israeli occupation, the US puts itself in the position of a rogue state. When superpowers do this, the whole panoply of international governance comes tumbling down, and that puts us all at risk. Precisely in an era when collective governance is necessary to overcome the huge challenges of climate change, horrendous weapons, vast movements of refugees, and all the rest, governments feel they can behave irresponsibly and do whatever they like.  Fine.  Let them. We will sink together.