After hearing from Ivan Zlax about Telegram and its founder Pavel Durov, I felt that it may be time to ditch the program from my phone. He dug up an old bio about him in the Internet Archive that has the following:

There have been numerous articles by Moxie and others regarding the security of Telegram, but this is the first time that I heard these details of Durov's past. I don't get the feeling from reading his posts on Telegram that he is turning over user data to three-letter agencies, but I also don't feel like he is being sufficiently open about things.

I have been looking at replacements for Telegram. One thing I considered was Delta Chat [3]. It has the advantage that one does not need to worry about not being able to communicate with existing contacts who do not use Delta Chat, because it simply repurposes email protocols. It sets up PGP automatically so that one can communicate securely with those who are on Delta Chat. This is a little like Signal, which uses ordinary SMS to send and receive messages for those who do not have Signal.

Parallel to my interest in privacy I have an interest in simplifying and minimizing interaction with my phone. This is also in line with recommendations for good operational security, because the less applications (and data) are on the phone, the smaller the attack surface. Some weeks ago I removed both email and NextCloud from the device. If one doesn't intend to use a dumb-phone (which are considered to be very insecure due to their reliance on old-fashioned protocols), the best thing is to bring the use of a smartphone closer to the level of a dumb-phone.

For now I have left Signal on the phone, and use it as an SMS replacement. A few of my contacts have Signal and do the same. But i don't feel inspired to recommend Signal to others. For one thing, it uses Amazon servers. If there were a decentralized messaging app that could also replace SMS as the phone's default messaging service, I might use that instead, but I haven't found one. I think it is possible to bridge between Signal and Matrix, but that defeats my purpose of minimalism.

Meanwhile, I continue to use Telegram on my computer as our family group is quite heavily invested in it (tons of family photos and videos, etc.) International Rescuers Day ceremony

Today we had the International Rescuers Day ceremony near the Spiritual Center. This emulates the event promoted around the world by the GARIWO organization. They actually refer to it as the "Int'l Day of the Righteous" but Prof. Auron, who initiated our local event, prefers the term "rescuer" to "righteous" due to the latter's possible religious connotations.

This year the village awarded the prize (which has no monetary value) to the Ta'ayush organization [4] and to the Afghan journalist and feminist activist Atefa Ghafoory, who wasn't present - she lives with her child in Sweden these days, after suffering quite badly at the hands of the Taliban. The annual event takes place in a dedicated area under the olive trees below the spiritual center, and we were lucky this year with the weather.

I was happy to hear from the Ta'ayush founder afterwards that David Shulman is still active in their activities and is writing a new book about these. His earlier short book, "Dark Hope" is excellent. 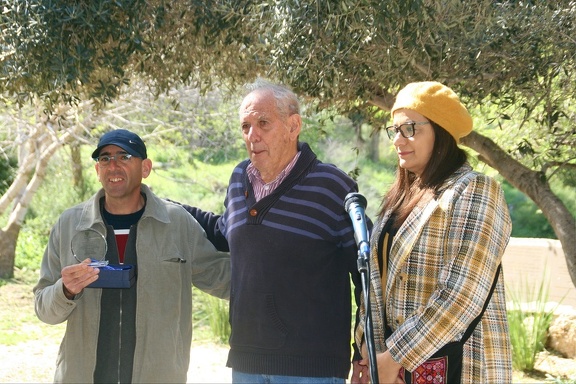 Einat, the new director of the spiritual center, invited a professional photographer for the event, which, though I haven't seen the results so far, was a good idea as an olive grove has its challenges for photography: under the blotchy sunlight, many of my photos had areas that were either too dark or overexposed. I didn't find a good way, in darktable to deal with the overexposed areas, though one article did at least address the issue.

I liked a photo that Manuel had posted on Hubzilla, so I thought to follow the photographer. She is on Diaspora, on which I currently have no current connections. I enabled the diaspora protocol in Hubzilla's admin and added the add-on in the applications panel, but still no luck with adding her.

My solution for people in non-compatible social networks like Twitter and Facebook is a bookmark tool bar folder that I check occasionally. Works fine for me.

Twitter is launching a Tor-friendly version of its site - The Verge. Facebook, of course, has long had one. https://www.theverge.com/2022/3/8/22967843/twitter-tor-onion-service-version-launch